It’s the world’s first car build that is entirely sourced in trade for my original artwork.

How does project #hunzikerartcar work?

Wait, isn’t an art car where an artist paints a car? 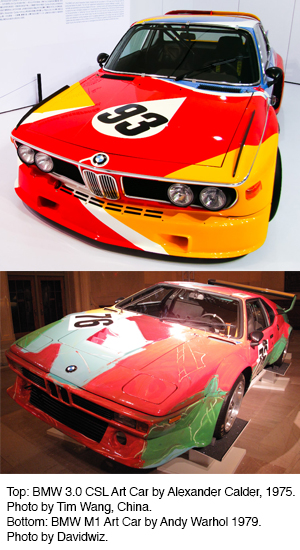 Exactly, which is why I didn’t want to do a traditional art car. The original BMW Art Car project was a groundbreaking concept. It was novel, well executed and broke into the mainstream. The involvement of famous avant garde artists such as Alexander Calder, Frank Stella, Roy Lichtenstein, Andy Warhol and Robert Rauschenberg propelled this “car as canvas” idea beyond the automotive market.

Over the years, I’ve been approached numerous times to do a Porsche art car (most recently I was offered a Taycan wrapped in white). To be honest my heart was never in such a project. For one, this idea of the “car as canvas” had been done before (and very well) and throughout my career, I’ve always tried to be innovative. Second, the idea of the traditional art car is firmly rooted in BMW’s heritage; it belongs to them and to world-renowned contemporary modern artists. As much as you might like my art, I don’t belong to the latter.

Before I started this project, I shared the idea with my friend and writer/reporter Marshall Pruett, and since he’s infinitely more talented with words than me, I will share his first reaction with you:

“You’re an artist and now you’re redefining the concept of the art car. Not in the literal sense of painting on a car, but by creating an art-based project that produces a car. By creating art, you will create a car.”

How much artwork will I receive?

I will trade you the equivalent value in art. Let’s say you provide the wheels that I’m looking for and we agree that the value of the wheels is $8,000, in that case you will receive $8,000 of my artwork.

What type of artwork do I receive? 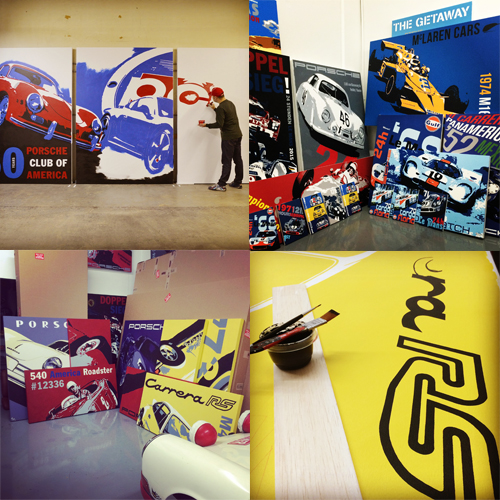 You get to choose what type of artwork you receive in the trade: You can pick from existing original paintings and/or canvas prints.

You may also wish to commission your own original painting where you get to specify the size and the subject matter.

The subject matter is entirely up to you, while this is a Porsche centric project, the subject matter doesn’t have to be a Porsche. Like with all my commissions, I will work with you to make sure you’ll be satisfied with your painting.

After all, a good trade is only good if both parties are happy.

How did you come up with this trading idea?

Nine years ago, fellow R Gruppe member Gib Bosworth was building a Kremer 911ST tribute car. He approached me about an original painting commission that would be unveiled at the annual RGruppe Treffen in San Luis Obispo, 2008. Part of our deal was that I would receive a set of 911S pistons and barrels for my 1968 911T Sports Purposes car (known as Whitemouse).

Years later, when the time came to overhaul the engine, I asked Bill Losee at Eurotech Performance about his labor cost for a top-end rebuild. His answer surprised me: He wondered if I would paint him an original painting in trade for his labor? I agreed and that got me thinking:

If I could trade my artwork for parts and labor of an engine rebuild, would it be possible to do an entire car build?

Unbeknownst to me, the seed of the #hunzikerartcar was planted. Of course, building an entire car in trade for my artwork is a much bigger challenge than an engine rebuild, but once the idea was in my mind I couldn’t let it go and I had to find out if it could be done.

Why are you doing this?

Why is the concept of “value in art” so important to you?

Easy: It’s how I make my living!

All joking aside, to date my art has been used without my permission to sell unauthorized posters, iphone cases, T-shirts, hoodies and jackets. There’s even a fellow in Italy who has copied one of my original paintings and sold it as his own creation (three times at last count). Magazines have featured my art on their cover without permission or payment and I’ve come across fake prints and posters, fridge magnets and even pillow cases. These counterfeit items are everywhere: UK, France, Italy, Singapore, China, Australia and countless other countries.

Somehow it’s OK to steal art but no one would say the same about stealing a car.

I know that I’m not going to stop art theft but I hope that this project will help equate the tangible value of art: By trading it for something that most people would agree has value, a custom-built 911!

What will you be building? 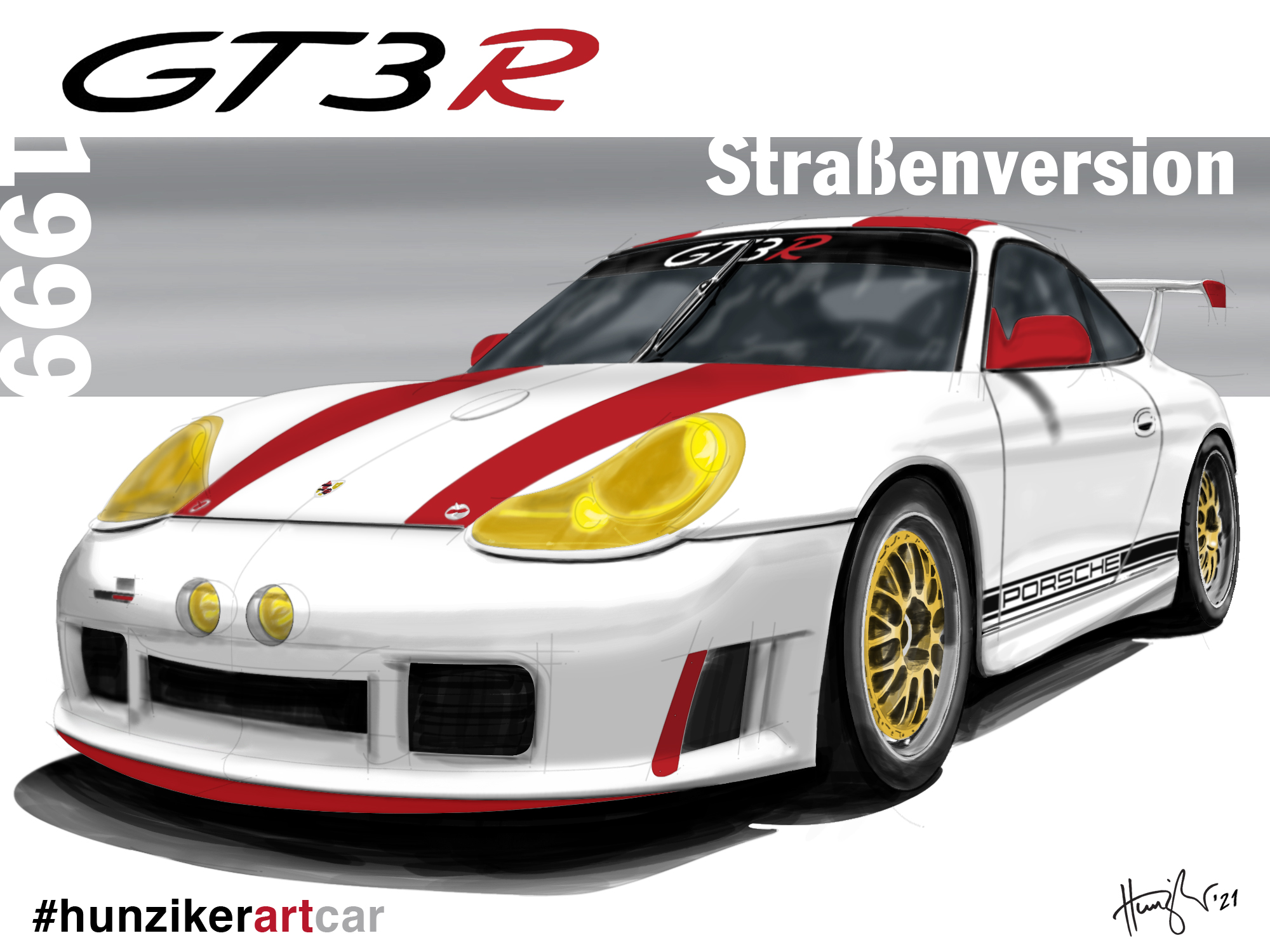 Has Porsche ever built such a vehicle?

No, the aim is to build the missing link between the 996.1 GT3 and 996.2 GT3RS. In case you’re not familiar with the dizzying array of GT3, R and RS model nomenclature, what follows bellow is a quick primer.

The 996.1 GT3 was released in 1999 and its engine was used to homologate the engines used in international motorsports competition. This practice is still in place today which is why Porsche continues to update the GT3 with each new model range. As such, the first GT3 was the basis for the GT3R race car for the newly formed GT category in 1999.

In time, the 996.1 GT3 spawned the 996.2 GT3 and GT3RS models – RS being the abbreviation for Rennsport – (German for racing) which led to a succession of GT3 and GT3RS iterations which were always based on the most current model platform. This custom continues to this day with the recently released GT3RS. 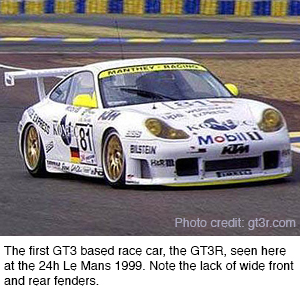 In 1999, Porsche built two GT3R prototype racing cars that ran at Le Mans of that year. For their first Le Mans race, the GT3Rs ran in narrow body configuration. Six weeks later, the two GT3Rs showed up stateside and participated in the remaining five rounds of the 1999 ALMS season. Now in the hands of Manthey Racing and RWS Motorsport, both GT3Rs had sprouted wider front and rear fender extensions and ran on 10″ and 11″ wheels.

Unlike the the 1967 911R model, the 1999 GT3R model was never released as a street legal car. This then, finally brings us to the car of my affection: A 1999 GT3R Straßenversion (German for street version). The birth model of all the modern RS iterations: A car that never existed, but to my mind it should have and now I attempt to build it.

What is the donor vehicle that you’re looking for? 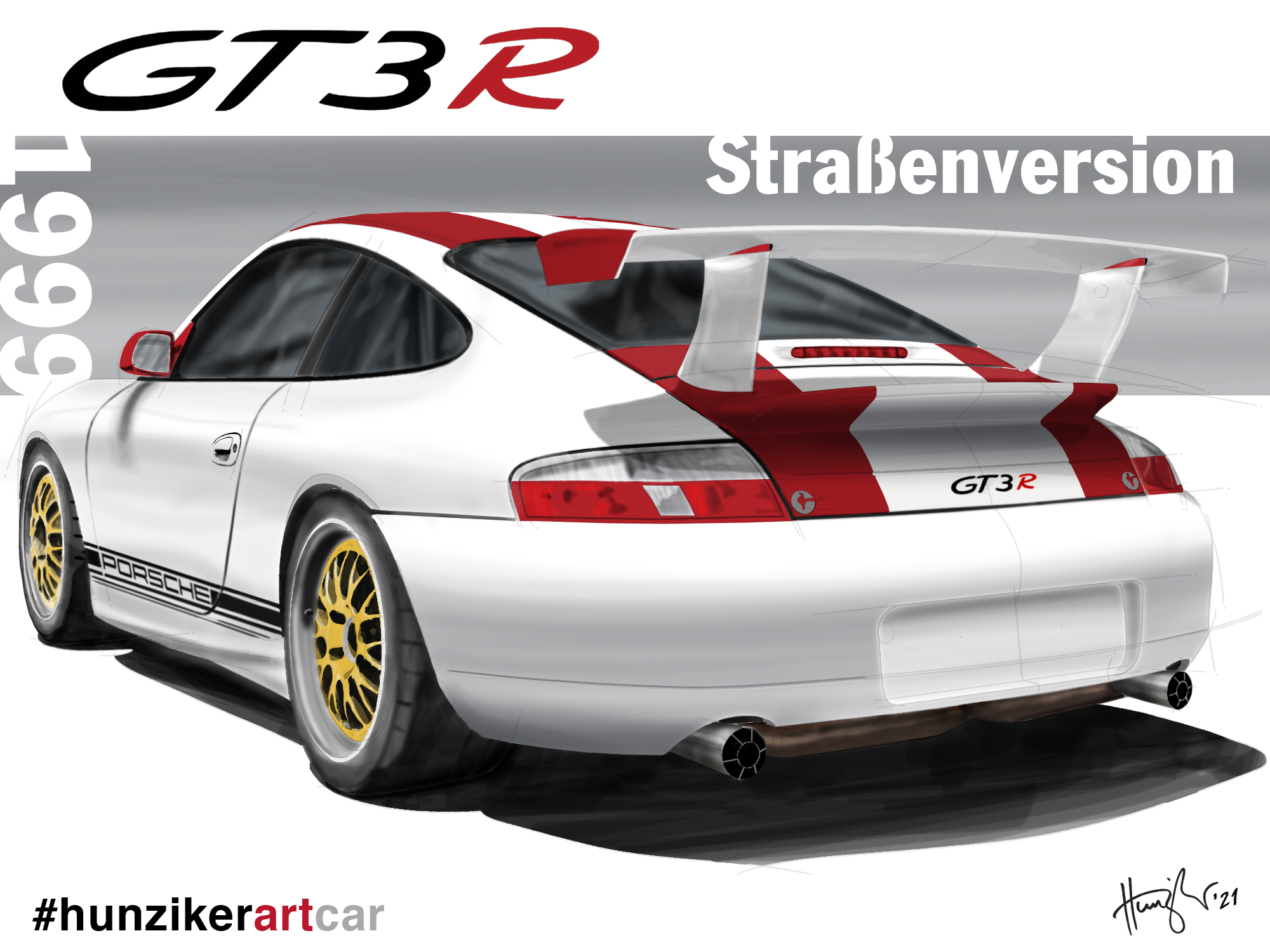 Because the car that I want to build, from concept to mechanical components to fit and finish will feel like a real factory built car: As if the manufacturer had built it but then decided against putting it into production: A 1999 GT3R Straßenversion would have had a Mezger-based engine and a transmission with interchangeable ratios based on the G50 gearbox, neither of those things are part of a 1999 911 Carrera.

Why not start with a 996 Cup car and modify it for street use?

A 911 Cup has a VIN (Vehicle Identification Number) that will not allow it to be registered for street use.

Then why not just build a racecar project?

While building a racecar project is very tempting, street cars are more inclusive and easier to share with people. A racecar is much more restrictive, both in use and target audience.

A lot of these projects have been done before. Also, I already have a 1968 911 Sports Purposes car (our Whitemouse), to me it’s the ultimate longhood 911.

While the idea of another longhood is really appealing, I want to build something that no one has done before and will be new to me.

Who can participate in the #hunzikerartcar?

Anyone who shares the vision and is ready to trade a car, parts or labor in exchange for my original artwork.

How do I participate in the #hunzikerartcar?

I will release a project list with various parts and labor needs. If you supply anything on that list, I will trade you my artwork for it.

Even if you don’t have any of the parts / labor on the project list, you can participate in the #hunzikerartcar: By first acquiring the desired part and then trading it to me for the equivalent value in artwork.

One thought on “The Project Explained”